Single-payer healthcare programs for all operated by government is nothing new, even by Bernie Sanders’ standards. The National Socialists of Germany inherited a socialized medicine and welfare society in 1933, and made it stronger. Hitler quickly ordered the National Socialist People’s Welfare (NSV) organization to “see to the disbanding of all private welfare institutions,” which began the Nazis’ effort to completely nationalize charity and healthcare in Germany.

And yet, the banning of privately-operated welfare and medical organizations implied far more. By banning private healthcare and welfare in Germany, the Nazis exhibited their true red-revolutionary colors, following in the socialist footsteps of the Soviet Union. Even today, most American left-wing progressives would be hard pressed to deny Non-Government Organizations (NGOs) the opportunity to do social work. So, does this place American progressives on the far right because the Nazis’ social welfare programs were so extremely left-wing?

One of the biggest cheerleaders of mandatory socialism was Joseph Goebbels, Hitler’s Propaganda Minister and briefly the Chancellor of Nazi Germany. Considering himself a communist in his college years, Goebbels, continuously applauded the generosity of Hitler’s welfare state, boasting in a 1944 editorial, “Our Socialism,” that “We and we alone [the Nazis] have the best social welfare measures.” He did not stop there. He proclaimed that “English capitalists want to destroy Hitlerism” because of the Nazis “generous social reforms.” 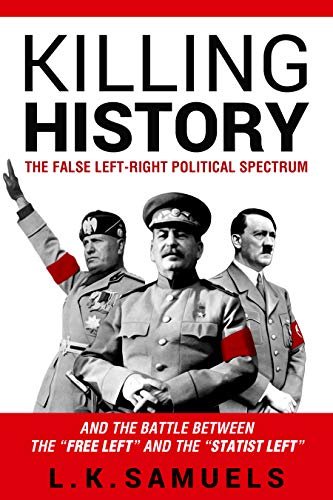 But did everyone receive socialized healthcare and welfare? What about the Jews in Germany? Well, at first the Jews and minorities were able to participate in the Nazi social safety net, until 1938. By this time the Nazis’ Völkisch equality policies no longer applied to unpure races and capitalistic classes. Instead, they correlated more to George Orwell’s Animal Farm allegory about the hypocrisy of governments who seek control by promising complete equality, but instead bestow power and privileges upon a small political elite—immortalizing Orwell’s phrase: “All animals are equal, but some animals are more equal than others.”

Of course, this same hypocrisy has occurred in every Fascist-Marxist and “social justice” nation, especially the Soviet Union. Here, equality became another word for inequality.  The bourgeoisie in communist Russia suffered the same fate as the Jews; some 7-10 million Ukrainian Kulaks were denied food and perished. In late 1929, it was Stalin who demanded the liquidation of the Kulaks as a “class enemy.” He defined wealthy Kulaks as “peasants with a couple of cows or five or six acres more than their neighbors.”

For socialists, equality is an empty phrase. Today, it is recognized that Nazism included many of the same tenets as Social Democracy and Democratic Socialism. Hitler even admitted several times that he was a “Social Democrat” who favored a “national Social Democracy” movement.

The real motive behind Bernie Sanders’ call for “Medicare for all” is to confiscate wealth, redistribute it and turn America into another impoverished Venezuela, where despite their policy of a guaranteed social safety net, there is no food, water, medicine or freedom, except for government apparatchiks. It appears that under fascist socialism, some are indeed more equal than others.