We have all been listening to Mike Lindell for the past few months about how he had irrefutable evidence of election fraud. Another BOOM is what I figured. We are all getting pretty tired of the hype. I wasn’t going to bother watching it but my wife did and then we watched it together.

Maybe there is nothing we can do about it, maybe there is, but the fact is that he really does have irrefutable evidence of the election fraud. That’s why not even George Soros’ factcheck.org will touch it. They “debunked” the first one, but they are hoping that people who check don’t realize that Mike has a second video.

Not many people have the time to watch an hour long video, so that will limit the audience.

That’s why I am going to outline the most imporant parts so you can get the bullet points in a couple of minutes.

This is the real thing. The election was stolen, and it was stolen online in real time and if we don’t do something about it our country is lost.

Dr. Douglas Frank holds a Ph.D in Surface Analytical Chemistry with over sixty scientific publications including a cover page article in Science magazine in 1990 and was on the cover of the Naturwissenschaften, in Europe.

He determined that 2010 US Census data was used to inject phantom voters into the 2020 election rolls. He proved it by going house-to-house to 1600 houses to audit 2020 voters and determined that 32% of the “voters” did not live at that address. THIS WAS NATIONWIDE, IN ALL 50 STATES.

Every precinct/county in the country has a voter registration database.

In most states you can download the voter registration database for free but some states charge hefty fees.

The voter registration database shows all registered voters and their voting histories.

There were lots of (too many) voters who only voted once, in November 2020.

Hired people to go house-to-house to 1600 houses to audit 2020 voters and determined that 32% of the “voters” were “phantom” and did not live at that address.

Votes can be manufactured by having a computer algorithm that votes for registered voters who never show up to vote.

The only way to know for sure if a “voter” actually voted is to ask them.

The night of the election (and for several days before and after), White Hats were monitoring computer intrusions into the voting machine network and collecting times and MAC/IP addresses of the intruders.

You can graph the number of registered voters by age from the voter registration database.

The numbers of people who voted in each age bracket should always be substantially less (~80%) than the number of registered voters in that bracket.

Small discrepancies are disregarded by “experts”

90% or more is highly suspect.

Hamiltion County, Ohio had 95% of the population registered to vote with some ages having more voters than residents of that age. 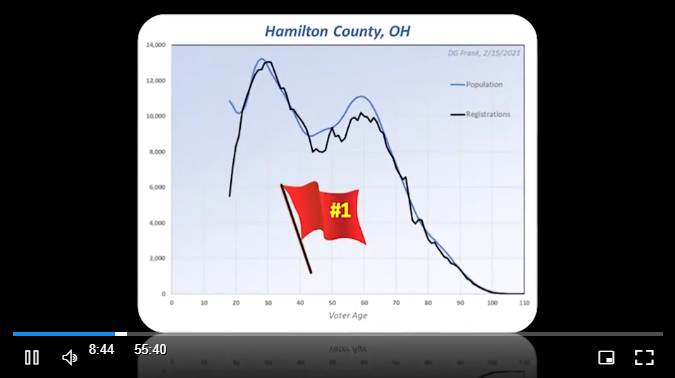 The percent of votes cast (red curve) for each age group were exactly the same, mirroring the registered voter curve. This is almost impossible in even one county, but it happened in all 88 counties in Ohio, which could only be accomplished through a computer algorithm. 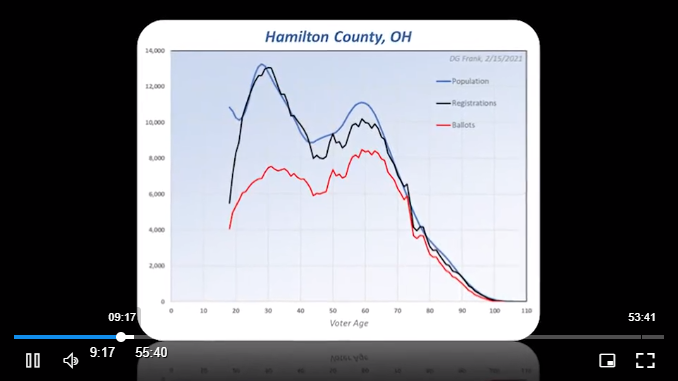 The same key was used for all 88 Ohio counties. The key is the algorithm that turns registrations into “voters.” What this means is the same percentage of each age group voted in every county in Ohio. 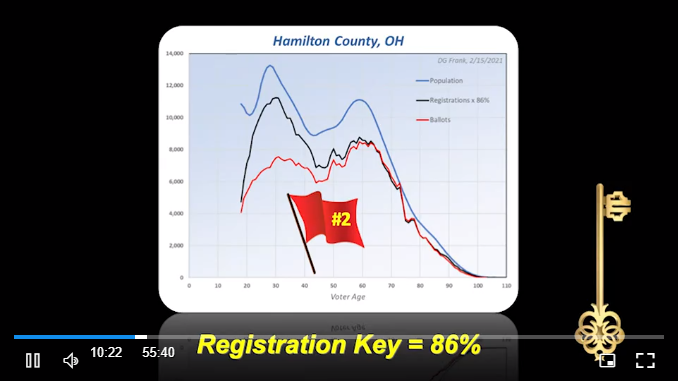 This is the key that converted registrations to ballots in every county in Ohio. Dr. Frank took the average of fourteen Ohio counties to create the key that worked for all 88 Ohio counties. The curve is a 6th order polynomial, which makes it much easier to construct the key because only 6 numbers are required instead of 82 numbers for age 18 through 100. Along with the turnout number the algorithm can predict every county in Ohio. This allows the intruders to set up the alogorithm ahead of time. 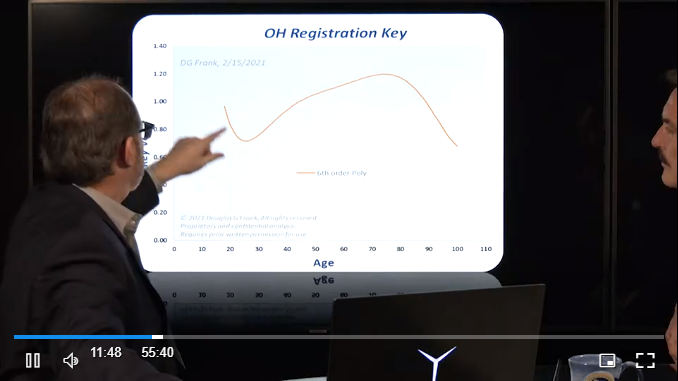 The Stark County, Ohio voter curve shows two sharp shoulders at approximately 75 and 80 years of age. All 88 counties show this same pattern of 75 and 80 year old voters. This pattern holds up not only in Ohio, but in EVERY STATE tested so far. The gray curve is the predicted voter results from the algorithm, the red curve is the actual voter results. The correlation coefficient between the two is 1.0000, meaning it is a perfect fit. 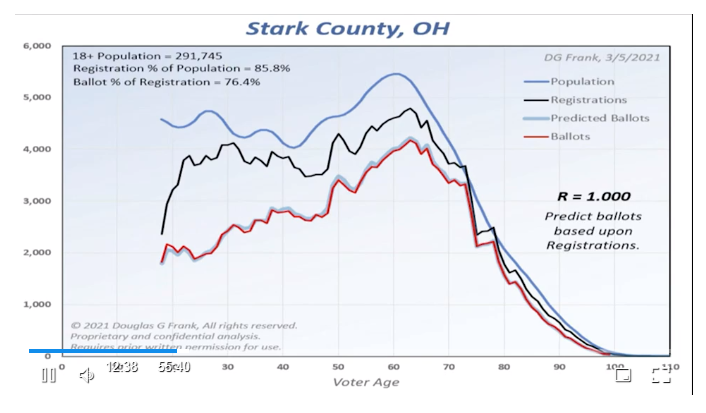 This could only be accomplished with constant interaction between the voting machines and a supercomputer somewhere on the Internet. When Dr. Frank saw Mike Lindell’s first video all the pieces fell together. Mike’s group has all the evidence on the computers that were doing this, they just didn’t know what those computers were doing. Dr. Frank’s discovery fills in what they were doing.

The two-shoulder pattern in voting for 75 and 80 year olds shows up in Pennsylvania District O4 voting records. 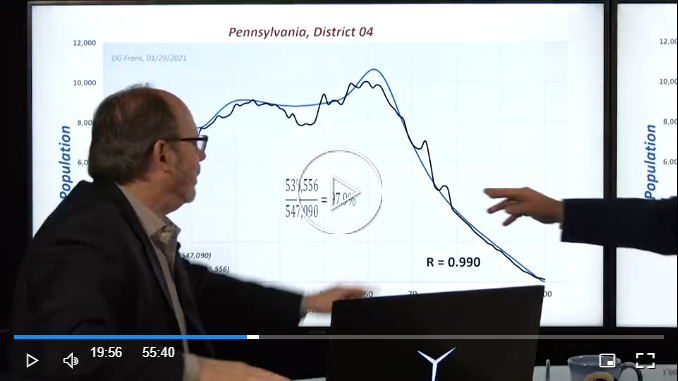 The 2010 US Census data for Pennsylvania District 04 has those same two shoulders. 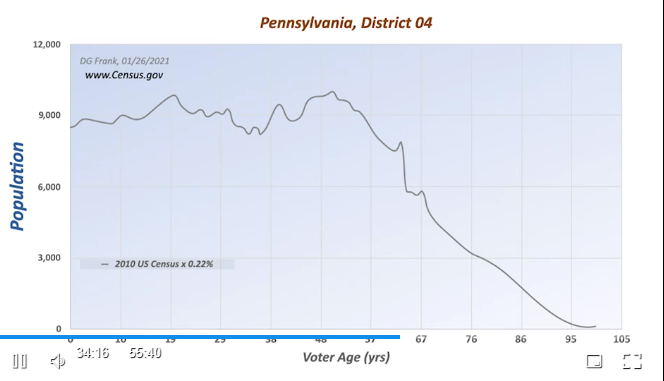 Q: What are the odds? 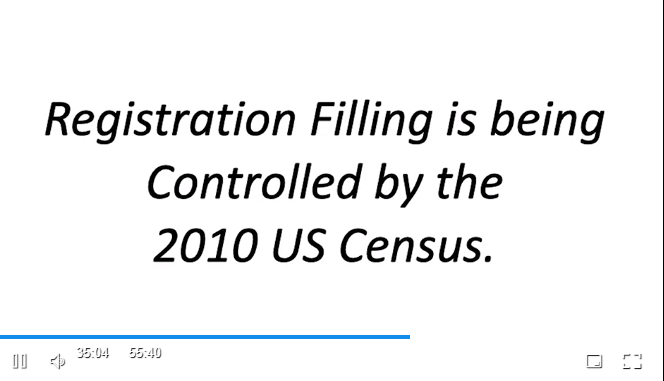 2010 Population was used by the algorithm to determine phantom registrations 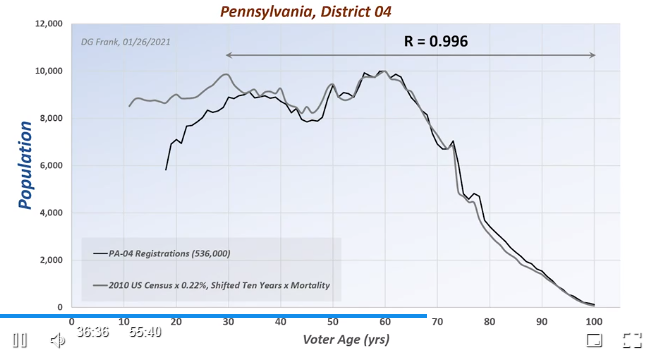 Bloomfield County Colorado; registrations greater than population because population decreased since 2010. More people voted than even lived there. 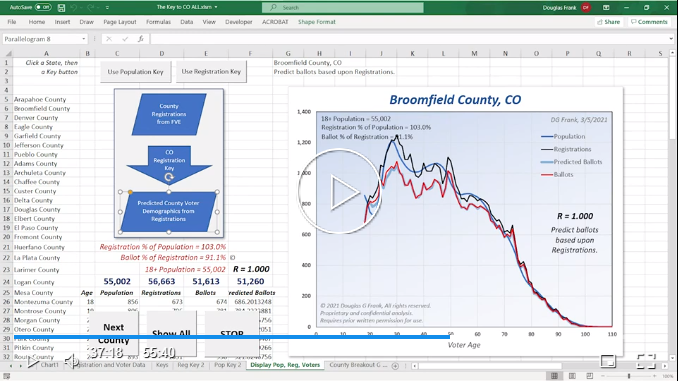 More people registered in 20 Colorado counties than live there because they used the 2010 US census in the algorithm and population decreased in those 20 counties. 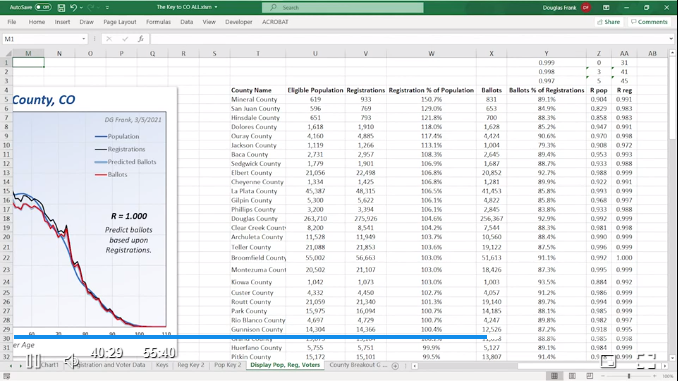 Jackson County, Colorado; more phantom voters than live there because population decreased since 2010. 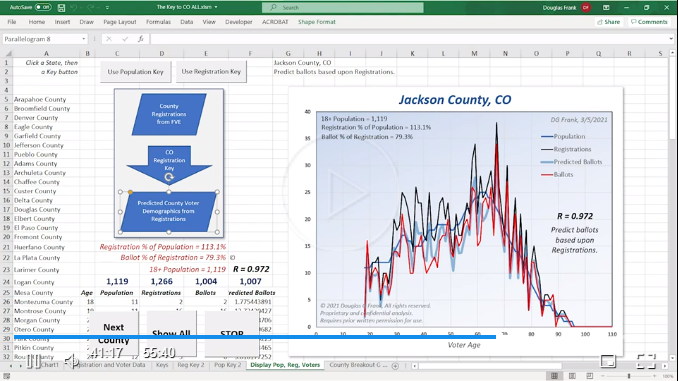 Knocked on doors and determined that 32% of voters did not live there.

Anybody can get their county’s voter registration database and conduct their own audit of people who only voted in the 2020 Presidential election.

THIS IS THE BIGGEST CRIME IN HISTORY. WE MUST GET RID OF THE COMPUTERIZED VOTING MACHINES.